The surrealism of a non sequitur world: Un Chien Andalou (1929)

This post first appeared as "The real and the surreal" in The Hindu on February 15, 2012. 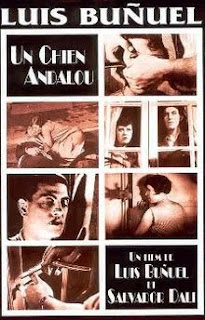 A sharp blade slices through an eyeball just as a cloud slices through a full moon. This perhaps is the singularly most unforgettable scene from one of the most intriguing films ever made—Luis Bunuel’s Un Chien Andalou (An Andalusian Dog, 1929), which, at just 17 minutes duration, packs in bizarreness on such a mammoth scale that it leaves the viewer desperate for any sort of meaning. Bunuel made this silent film, his first, in collaboration with fellow Spaniard, the famous surrealist painter Salvador Dali, after the two exchanged notes on their dreams—the dream world being central to their surrealist imagination, according to which the unseen powerful reality of life lies in the darkness of sleep, or in the subconscious, and not in the rationality of daylight.

As surrealist French director-writer Jacques Brunius has observed, sleep is akin to film viewing in that both involve a descent into darkness and a shutting off of the immediate physical world: In sleep, the mind commences its journey into dreams, just as, in film viewing, the mind embarks on a journey into a world of fast-changing images. Both are subterranean travels that subvert the notions of time and space, which are rendered meaningless by the merging of past, present, and future, and the merging of geographically distinct spaces. As Bunuel and Dali record the disjointedness on celluloid, the resultant onslaught of unanchored images and events is disconcerting to even the least rationally inclined of viewers. The human mind naturally tends to discern meaning or pattern in any information that it is presented with—and the film precisely staves off that tendency to find comfort in the act of comprehension.

In the dream state, we are faced with random situations, and while all that disjointedness may make sense in sleep, governed as sleep is by its own dream logic—where conventional logic is temporarily suspended, and just about anything is possible—the waking state shows the same disjointedness to be impossible and unrealistic. The film’s realism is then a surrealistic realism, and the film could be described as an ode to the realism of the irrational—something that it portrays in the form of a stark bunch of incidents which, in the waking world, may just as well signify or not signify anything. If entropy is the natural state of the universe, then Un Chien Andalou, with its clash of random images, stands for entropy—and here I am succumbing to my human tendency to rationalize as I sift through chaos in search of beauty.

Dali himself appeared fleetingly in this film whose visuals defy the orderly world of a meaningful narrative. A range of fantastic and absurd images float around in no particular order, untethered, rooted in nothingness: ants crawl out from the palm of a human hand; books turn into pistols; a dismembered hand is poked at with a stick; the hand is then placed into a square box, which, earlier, a man in nun’s attire, wears around his neck when he cycles down the street; a figure on the road is mowed down by a passing vehicle; and two pianos with donkey carcasses on top, tied to two priests, are dragged across a room, with ropes. These visuals frustrate the viewer in their non-amenability to any sort of pattern. Yet, the non sequitur-ness that is irritating is, paradoxically, liberating since everything is both relevant and irrelevant, real and unreal. A surrealist work such as Un Chien Andalou is everything that the viewer wants it to be, and everything that the viewer does not want it to be.