This post first appeared in the PassionForCinema blog on July 29, 2009. 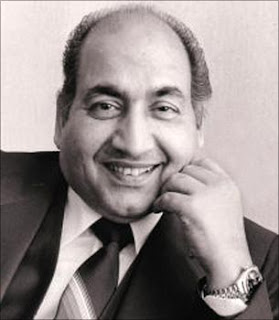 Come July 31, and it is Mohammed Rafi’s death anniversary. So much is written about Rafi (1924-1980) that I don’t quite know where to begin and what new to say really. I am stumped. It should just suffice if I say that Rafi was one of the most versatile singers in the history of Hindi film music. His pan-Indian (and beyond) appeal seems to get only stronger with time. From the doleful Jugnu (1947) to the patriotic Shaheed (1948) to the classical Baiju Bawra (1952) to the effervescent Mr. and Mrs. 55 (1955) to the regal Raj Hath (1956) to the poetic Pyaasa (1957) to the meltingly romantic Barsaat Ki Raat (1960)—phew! the list is endless—Rafi sang it all. And more.

Equally at home on different turfs, Rafi could convincingly slip under the skin of characters that were poles apart: he sang for the brooding Dilip Kumar in Deedar (1951) with the same ease with which he lent his voice to a frolicking Johnny Walker in C.I.D. (1956). And, truly, it is difficult for the listener to decide where Rafi excels more.

In his earlier years, before he had fully come into his own, Rafi sang for Ghulam Mohammed (Naushad’s protégé) a lovely duet with Lata in Pardes (1950), called “Akhiyaan milaake zara baat karo jee,” a song to which I am very partial for two reasons: Madhubala’s striking beauty, and Rafi’s deep, powerful rendering that is reminiscent of Pankaj Mullick, not to mention a very young Lata’s exquisitely honeyed voice.

In the lines of the second stanza, “Dil ke khazaaney koyi aaya hai lutaney aji din hain suhaney chaley aao naa,” Rafi’s inflection has a strong, decisive tinge of Mullick’s style of singing; it is one of those nuances that just cannot be overlooked. I have not heard such likeness to the Bangla maestro in any of Rafi’s other songs. (Of course, there are many Rafi songs—his earlier ones, especially—that I have not heard; so there might easily be other instances as well.)

Moreover, for various reasons, some songs are not as well known as they deserve to be (one does not find these in the typical compilations), and this particular Rafi-Lata duet is a prime example. (By the same logic—or lack of—Ghulam Mohammed was one of those vastly—and most unfairly—underrated composers.) Here is the song, on Rahman and Madhubala: Song 1:

As the decade of the 1950s unfolded, Rafi’s own distinct style—with its almost nonchalant attitude to the vagaries of life—firmly stuck roots. This is the quintessential Rafi, and nowhere is this more apparent than in the “Le chala jidhar ye dil nikal padey” number from Miss Bombay (1957), picturized on Ajit (much before he turned villain for the screen).

Bombay—that teeming metropolis, teeming then in the 1950s just as it is teeming today—the land of opportunities—was masterfully captured by lyricist Prem Dhawan to composer Hansraj Behl’s tune that is born for the harmonica. (Its more famous precursor that spoke of urban vicissitudes, also tailor-made for the harmonica, is, of course, “Ay dil hai mushkil jeena yahaan” from C.I.D. in 1956.) Here is Rafi in Miss Bombay: Song 2:

I am going to end this piece with “Dil ki tamanna thi masti mein,” a hit song from Gyaara hazaar ladkiyaan (1962), a film that is, nevertheless, not easy to come by. Rafi and Asha Bhonsle sing for Bharat Bhushan and Mala Sinha, under the music direction of N. Dutta (another underrated composer). On a personal note, this is one of my mother’s favorite songs—it takes her back to her college days, when she and her friends would attend matinee shows, spellbound by their favorite heroes. And, of course, they would also get the latest fashion tips from the reigning screen queens of the day, whose sari styles or hair buns they would imitate. That nostalgia has badly rubbed off on me, too; it just underscores the cross-generational appeal that Rafi’s songs have. So here is going back to another era: Song 3:

Posted by Nivedita Ramakrishnan at 5:18 PM