Black Narcissus (1947) and the colors of chaos, with a touch of E. M. Forster

This post first appeared in the PassionForCinema blog on August 13, 2009. 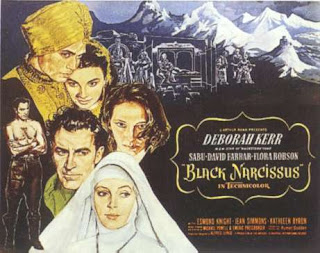 No one really knows what exactly happened to Adela Quested inside the Marabar Caves, in E. M. Forster’s novel A Passage to India (1924)—except that she came out of the caves disheveled and nutty, in an accusatory mood, and enveloped in a horrible confusion that was at the heart of this Forsterian narrative. The enigma of the Marabar Caves—and what it can do to hapless westerners, especially women, who end up making spectacles of themselves—is legendary in the annals of colonial literature.

Something similar is the theme of Michael Powell and Emeric Pressburger’s British film Black Narcissus, which released in the U.K. on 26 May 1947, just before the British Raj bid adieu to India. (Interestingly, in the U.S., the film released on 13 August 1947, just two days before India’s independence.) Based on a 1939 novel by Rumer Godden, the accused here is a place called Mopu (not far from Darjeeling), 8000 feet up in the Himalayas, where a palace-turned-convent rests rather precariously—both literally and figuratively. 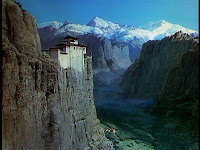 The palace, once a harem of the local Hindu king, is now home to St. Faith, a group of five nuns from Calcutta. At the request of General Toda Rai of Mopu, Sister Clodagh (Deborah Kerr in a subdued role) leads four nuns from the Convent of the Order of the Servants of Mary in their mission, which is to open a dispensary and school for the locals.

Once in Mopu, the nuns discover that the place is not just dangerously windy—it also has a dangerously volatile effect on their emotions. There is something about the air of Mopu that tests the equanimity (both physical and mental) of the nuns, and casts doubts on their lives of abnegation: it stirs in them long-forgotten thoughts and feelings; it rekindles certain emotions and memories that they have learned to do away with; in short, it disturbs the status quo.

The colors of life that they have trained themselves, as nuns, to keep at bay, burst upon their lives—and, indeed, upon the screen in spellbinding bluish-rosy-golden hues of Technicolor—as enticing to the nuns as it is to the viewers.

(A digression here. On the subject of Technicolor, my first impressions are certainly my last impressions: When I first watched Aan (1952), India’s first Technicolor film, I almost wondered if, perhaps, Mehboob Khan had ordered the film reel to be dipped in a bucket of dye. As the screen dripped with color, I felt that Dilip Kumar, Nadira, and Nimmi had come straight out of a book of fairy tales. Later, when I saw Errol Flynn and Olivia de Havilland in The Adventures of Robin Hood (1938), it only reinforced that association of Technicolor with fairy tales. And now, after many years, when I watch the Black Narcissus, the surfeit of colors evokes that same deliciously unreal world. Perhaps it is a case of childhood associations dying hard.)

Back to the story: For the nuns, who find themselves flitting in and out of their many reveries, the varied colors of Mopu bring to the fore the now-obscured aspects of life—whether it is the raw enjoyment of nature, the physicality of desire, or the wild human imagination. And all hell breaks loose. In keeping with the empire mindset, the Orient, it seems, has the power to disturb.

While Sister Clodagh is reminded of her first love in Ireland, Sister Philippa (who is in charge of growing vegetables) stares vacantly at the vast expanses before her and takes to growing flowers instead of the more useful vegetables. The worst case, though, is Sister Ruth who lapses into plain hysteria. Sister Clodagh often catches Sister Ruth casting surreptitious glances at the ruggedly handsome Mr. Dean (David Farrar), an Englishman who is the agent of General Toda Rai.

In fact, Sister Ruth, with a rush in her blood, is, in some ways, like Forster’s Adela. The Mopu landscape opens up a deep recess within her, and she goes hurtling down; if Adela was madly attracted to Aziz in the Marabar Caves, and invited doomsday for herself, Sister Ruth wallows in her imagined love for the rather attractively irreverent Dean (who queries Sister Clodagh, “Isn’t it your business to save souls?”), although here the repercussion is her violent death.

Like the Marabar Caves, the palace at Mopu is a maze with its many rooms. It is easy to lose one’s way and lose one’s mind as well. Cinematically speaking, the serenity of the surrounding snowcapped Himalayan peaks provides a perfect foil for the tumult of the mind and the nuns’ inner struggles. This juxtaposition of the inner and the outer worlds in the Black Narcissus is all the more significant because the outer world—the palace of Mopu and the Himalayan peaks—was not really the outer world; it was a creation of the set designer. If cinema is the art of make-believe, it is verily so here. 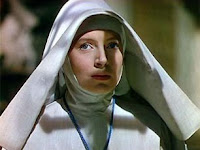 Powell and Pressburger use chiaroscuro—or the interplay of light and shade—to bring out, very effectively, the nuns’ conflicted states of mind. Sister Clodagh’s bright and cheerful past in sunny Ireland, for instance, transposes onto the dark silhouette of her present nun’s attire. In another unforgettable shot, the crucifix casts its shadow on her, pulled as she is in opposite directions. The camera angles and the lighting are very reminiscent of film noir—the addition here being color, which is co-opted to convey the underlying chaos of the narrative.

The chaos of Mopu is aptly represented by the wind, which “blows seven days a week;” indeed, the wind is such an integral part of the film that it comes across as a character in itself—it becomes a personification of the Orient that defies control. And it, eerily, blends in with the film’s background musical score. It howls and causes terrible echoes—just like the (in)famous echoes in the Marabar Caves that led to Adela’s discomposure. 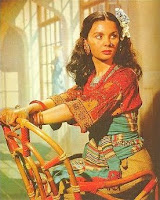 The Black Narcissus has all the staples of the colonial story: there is Kanchi, the exotic-looking local girl; there is high-strung Angu Ayah, the antiquarian caretaker of the palace; then there is the bejeweled and perfumed young prince (the nephew of General Toda Rai), who persuades the nuns to accept him into the children’s classroom because he “want[s] to study a lot of learning”—incidentally the film is named after a perfume (from the army/navy stores in London) that the prince wears. He asks, “Oh, Sister, don’t you think it’s rather common to smell of ourselves?”

Finally, there is the holy man—the former General Sir Krishna Rai—now a silent, detached observer of life, always unfazed. The General-turned-sannyasi has a profoundly unsettling effect on Sister Clodagh, who, distracted as she is by the Orient, cannot help but feel spiritually inferior, which only exasperates her more. I am reminded of Professor Godbole in Forster’s book.

Filled with subterranean passions that bubble over, the Black Narcissus ends with the fiendish Sister Ruth falling to her death and the mission of St. Faith silently retreating out of Mopu. The viewer is left with images of the falling rain and the snow-clad peaks. According to film critic Dave Kehr, given the release date of the film, the Black Narcissus could, perhaps, be seen as the British empire’s swan song (although the book was published in 1939).

Disclaimer: Images from the Internet have been used for academic/discussion purposes only.
Posted by Nivedita Ramakrishnan at 5:21 PM