This post first appeared in the PassionForCinema blog on September 20, 2009.

TIME magazine described Closely Watched Trains (1966) as one of the 100 best films ever. Set in German-occupied Czechoslovakia during the last days of World War II, the film, directed by Jiří Menzel, powerfully documents a young Czech boy’s aching—and poignant—personal crisis—in this case, a not-so-easy discovery of his manhood. (Spoiler warning: This article gives away the story; if you’d rather watch the film first, stop right here.)

Based on a story by the novelist Bohumil Hrabal, the film is a stark portrait of life’s crisscrossing aspects and moods. For Miloš Hrma (played by Václav Neckář), who has just found initiation into the working world in the form of a train dispatcher’s assistant, the initiation into life’s sexual aspect—or love, to put it more poetically—is fraught with all sorts of difficulties, from the physiological to the emotional. As Miloš looks around at the world, it strikes him that most people are spared the embarrassing problem that he faces—the problem being his hopeless ineptitude in matters of love and physical fulfillment. Here is something that is so tragic (at least for the subject) that, at some point, it oversteps its boundary and becomes comic and tragic, or comi-tragic.

The rather sensitive Miloš is consumed by this deeply personal problem, which afflicts him horribly and settles into a vicious circle: he is tormented because he is physically unfulfilled; this lack, in turn, makes him diffident and awkward with people, especially women—which, then, makes the much-sought-after physical fulfillment a spirally elusive goal.

Miloš’ conflict is played out at a nondescript, although strategically positioned, railway station. Trains carrying ammunitions to the Germans pass through this station. Train dispatcher Hubička, Miloš’ boss, is responsible for the smooth and timely passage of these trains. On the subject of women, Hubička is quite the pro, and his time at work is mostly spent in seducing women, notably the acquiescing telegrapher. The confused Miloš, of course, looks on as his boss effortlessly dabbles in women, and he is constantly reminded—stingingly—of his own inadequacy in the matter.

After a particularly unsuccessful attempt at adulthood, Miloš checks himself into a room at an inn, where he slashes his wrists. However, self-extinction does not come that easy; he is rescued, and finds himself in the hospital, very much alive, and privy to the same depressing thoughts. He confides to the doctor: in Miloš’ own words, “Everything is so difficult in life, for me. While for others it’s all child’s play.” The doctor advises the novice in Miloš to find wing under an experienced woman, who can successfully initiate him into one of life’s most primordial acts. (In some ways, I was reminded of Hermann Hesse’s Siddhartha approaching Kamala for an understanding of certain primeval matters—something that the much-evolved Siddhartha felt was crucial to life’s completeness.)

So in keeping with the best comi-tragic (or is that tragi-comic?) tradition, Miloš, desperate for an older woman, goes asking for one, quite literally, from door to door. His desperation even drives him to ask the stationmaster, more a bird breeder than otherwise, for the latter’s matronly wife. 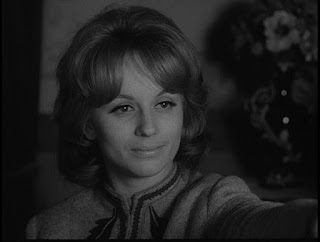 One day, finally, Miloš’ life changes—and changes forever. Hubička is the agent of that change. Hubička is part of the Czech resistance against the German Occupation. When the rather enterprising Viktoria Freie, a fellow-member of this group, arrives at the station, ridden with bombs to blow up a train, Hubička introduces her to Miloš, certain that she is the solution to Miloš’ problem. And it works.

Miloš is euphoric, and his newly discovered personality now overflows with self-confidence and zeal. In this spirit, he takes upon himself the task of planting the explosives on the railway tracks. (His boss, who is supposed to do this deed, is in trouble for his dalliances with the telegrapher.) Miloš achieves the mission but also dies in the process, incidentally—and ironically—achieving a permanent place in the history of the Czech resistance.

It is almost as though once his physical longing is quenched, life is complete for Miloš, who is transmuted into a hero of sorts. Menzel conveys the underlying parody of the situation, of this incidental heroism, in such an unobtrusive way that it quite slips past the viewer, who suddenly realizes that Miloš’ death quietly subverts the grandeur of martyrdom. On first impression, the personal merges with the political—or does it? Inarguably, this is one of cinema’s most epiphanic moments.

Closely Watched Trains (the title refers to the close eye that the Nazis kept on trains ferrying ammunitions their way) is the story of a complex human situation in a complex political climate, which is told simply and strikingly. It speaks not just of the brutality of war and death, but of the brutality of life itself, of the everyday, of each one’s peculiar trials.

Image credit: www.tcm.com
Posted by Nivedita Ramakrishnan at 9:34 AM