The music of Kamal Dasgupta

This post first appeared in the PassionForCinema blog on October 24, 2009. 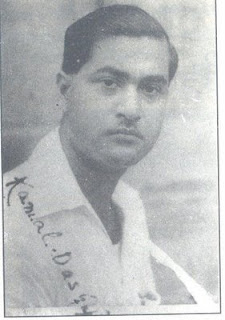 In the Hindi film Jawab (1942), singer-actress Kanan Devi lulls a restless and rather childlike P. C. Barua into sweet sleep. The song is “Ay chand chup na jaana,” and it is great for frayed nerves. Given my own battles with sleep—the activity that consumes nearly a half of our lives—I feel compelled to attest to the wonder of this lullaby by music composer Kamal Prasanna Dasgupta (1912-1974), with lyrics by Pt. Madhur. Here it is: Song 1:

Considering the extraordinary melody of Kamal Dasgupta’s music (he was also a singer), it is surprising that today very few remember this prolific genius who composed nearly 8000 songs that spanned quite a range—from films (Hindi, Bengali, and—most astonishingly—even Tamil, which I have not yet had the luck of encountering) to non-film categories such as Meera bhajans, Nazrul geet, kirtans, and ghazals, to name just a few.

Here is a composer who gave Jagmohan and Juthika Roy some of their best songs ever, a composer who shaped the early careers of Talat Mahmood and Hemant Kumar, much before they got a break in films as playback singers. And yet, woefully, it is not easy to find detailed, authoritative information on—as Sarwat Ali puts it, “the first million copy seller of golden discs in [the] Indian music industry.”

I am guessing that S. M. Shahid’s book (with accompanying CDs) called Kamal Dasgupta: Unforgettable Songs, whose existence I only recently discovered through the Internet, and which I have not seen, should fill the void to some extent. Certainly it is on my buying list now.

And here comes a pleasant discovery I made from the tracks listed in Shahid’s book/CDs—a piece of information that thrilled me indescribably: for many years now, I have been enthralled by singer Jagmohan (or Jaganmoy Mitra, 1918-2003)—another largely forgotten figure—without knowing that many of his gut-wrenchingly beautiful songs were composed by Dasgupta.

Although I knew that Dasgupta had composed Jagmohan’s eponymous “O varsha ke pehle baadal mera sandesa le jaana” for the film Meghdoot (1945), I had no idea that it was the same genius composer behind other Jagmohan numbers (largely non film) such as “Dil dekar dard liya” or “Deewana tumhaara kahta hai afsaana.” (By the way, the lyricist for these songs is yet another forgotten figure—Fayyaz Hashmi, 1920-?)

I wonder why the old HMV audiocassettes of Jagmohan’s songs never ever mentioned the name of the composer. That has been a huge disservice to the legacy of Kamal Dasgupta—and that damage has stayed on: even now, when I look up Jagmohan’s songs, or the more well-known Talat Mahmood’s early songs, on the Internet, usually there is no mention of the music composer. Why does this information have to be so arcane? Why should one have to burrow one’s way through to know the name of the creator of some of the sweetest melodies? It is utterly deplorable.

I will suspend my outrage for a while and return to Jawab (1942), possibly the first Hindi film for which Dasgupta composed music. One of its best-known songs is Kanan Devi’s “Toofan Mail” (in recent times, Lata Mangeshkar sang it for her Shraddhanjali series that celebrated all-time memorable songs), and it certainly ranks as one of the most unforgettable train songs in Indian film music. Lyricist Pt. Madhur sure nailed it when he wrote “Ek hai aata, ek hai jaata, sabhi musaafir, bichhad jaayenge.” Song 2:

From a soothing lullaby to a sprightly train song—and now to a “dulhaniya” song from Jawab: here is Anima Dasgupta (no relation of Kamal Dasgupta) singing “Dulhaniya chhama chham chhama chham chali” for actress Jamuna, who looks on dotingly at the bashful bride-to-be, a charming Kanan Devi in all her bridal finery. Song 3:

In keeping with the grand tradition in Indian films of double versions of the same song—happy versus sad, or fast versus slow, or solo versus duet—here is the second, shorter version of the “Ay chand chup na jaana” lullaby that appears towards the end of the film, when love triumphs. It is sung by, I believe, Kamal Dasgupta himself, along with Kanan Devi. Song 4:

While researching on Dasgupta on the Internet (a very frustrating endeavor), I found a particularly poignant statement by him. An article by Khalid Hasan mentions a line from Dasgupta’s 1971 letter to a friend in Bengali—and I quote the quote: “‘The pictures you see in front, everybody remembers them and praises them. But nobody wants to know the people who work behind the scenes, nor talk about them. That is the nature of the world.’” Guess that sums it up.

Image credit: stationhollywood.blogspot.com
Posted by Nivedita Ramakrishnan at 9:07 AM