This post first appeared in the PassionForCinema blog on March 19, 2010.

“… it [Karma] marks a beginning, and a very successful one, to break away from the general run of Indian films and to produce something entitling India to a place in screencraft among other countries in the world.”
-The Times of India, 16 March 1934 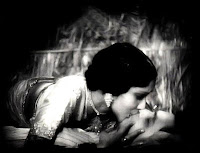 The husband-wife team of Himansu Rai (1892-1940) and Devika Rani (1908-1994) appeared together only once on the silver screen—in Karma (1933), described as the “first Indian talkie with English dialogue which set all London talking.” In India too, when the film released, there was a lot of talking—tongues wagging, rather. The reason? A kiss between Devika Rani and an unconscious Himansu Rai that is today still as famous as it was shocking then: sure enough, when I start typing in “Devika Rani” on that know-it-all entity called Google, the first suggestion that crops up is “Devika Rani kissing scene,” followed by other keyword combinations—all in search of that kiss from 1933.

The bilingual Karma, released as Naagan ki raagini in Hindi, was Devika Rani’s first acting role (she sang one song in English, and that was possibly the first English song in Indian cinema), while it was her actor-producer husband’s last. Himansu Rai, from then on, until his early demise seven years hence, concentrated on production, and managing the Bombay Talkies studio that he would found, along with his wife, in 1934.

In today’s globalized setup, where cross-cultural films, international productions, and foreign premieres are becoming fairly common, it is worth rewinding back to 1933, when such things, perhaps, had more of a novelty factor.

Himansu Rai, educated in Shantiniketan and London, was a dynamic personality whose aim was to bring Indian cinema of the day on par with the cinemas of Europe and America. Technique wise, Indian cinema—compared to its Western counterparts—was still very much in its infancy. For India to get a grip on the language of cinema, Rai felt it was necessary to initially at least collaborate with Western production houses—that would pave the way, eventually, for a self-sufficient film industry in India.

Karma, a joint production by Himansu Rai Indo-International Talkies Ltd., Bombay, and Indian & British Productions Ltd., London, and directed by J. L. Freer-Hunt, with music by Ernst Broadhurst and Roy Douglas, premiered in England to great success. (The background musical score evokes the mood of a Douglas Fairbanks film, with a touch of East thrown in.) As the London Star evening newspaper wrote about Devika Rani, “You will never hear a lovelier voice or diction or see a lovelier face.” Judge for yourself. Excerpt 1:

Given the time period of the film—it was set in contemporary India—it is not surprising that the film held immense appeal for a Western audience. All the ingredients of an exotic colonial drama were in place: a love story set amidst grand palaces, tiger hunts, snake bites, holy men, frenzied natives, miraculous cures, and centered around that curious eastern notion of karma that binds human actions to consequences.

According to The Times of India, cited earlier, “There was some fear on the part of the producer, Mr. Himansu Rai, that a film in English and designed for the international market might not appeal to the people of this country, since ‘Karma’ is as different from the average Indian film as chalk is from cheese.” The fear was, however, “happily … dispelled” when the film opened favorably, first in Bombay and Delhi, then in “places as widely apart as Madras and Karachi”—although certainly it was a bigger hit in England than in India.

The fact that the film had received high praise in England created a public curiosity in India; approbation from the West (mixed with the cultural insecurities in the people’s psyche) flattered them enough to pay attention to the showcasing of Oriental India.

Still, India was not amused by the kiss between the grandniece of Tagore, and her husband. It was long, fairly unrestrained, and an outrageous departure from the mores of the time. But the kiss went past film censorship (it began with the Indian Cinematograph Act of 1918), which was then more wary of nationalist, anti-Raj feelings than it was of demonstrations of human love.

The film was shot at the Stoll Studios in London and at various outdoor locations in India that included palaces and an ancient Shiva temple. There is attention to detail in capturing the ambience of an Indian princely state of the times—be it lifestyle, apparel, public festivities, or local beliefs. Which is why the opening credits acknowledge “the gracious indulgence of H.H. The Maharawat of Partabgarh” for the film’s depiction of “a pageantry which the jealously guarded traditions of Indian states permit to none but the Ruler himself”; “the exceptional privileges granted by the priests of the temple”; and “the courtesy and guidance of the Central Publicity bureau of the Indian State Railways in placing at our disposal their unrivalled store of information.”

And thus begins the love story of two Indian royals, at the heart of which is the clash between tradition and modernity, a tension that is heightened during the colonial encounter.

A note here: I have had to piece together the story from a bunch of scenes, and that too from memory. I hope I have done justice to the logic of the narrative. One more thing: With the prince and the princess addressing each other as “darling” and “beloved” and so on, and with no else calling them by their names, I guess their names remain a mystery.

The princess of Sitapur (Devika Rani) and the prince of neighboring Jayanagar (Himansu Rai) are deeply in love with each other. The prince’s father (actor Dewan Sharar, who wrote the story) disapproves of the “modernizing” ideas of the princess, which he surmises as her converting “temples into hospitals,” “palaces into schools,” “rice fields into playgrounds”—and as the king’s adviser adds—”peasants into cricketers.” The adviser, a holy man, has a plan to tackle the princess: it is easier to put a stop to her radical ideas by actually letting her marry the prince. As the king’s daughter-in-law, her powers will be undermined.

The princess, meanwhile, thinks of a way to make the king of Jayanagar agreeable towards her; he is fond of hunting, so she plans to offer him a chance to go tiger hunting in the forests of Sitapur. There is a problem, though. There has never been any hunting in Sitapur and it could offend the people’s sentiments. The prince is concerned for the safety of the princess, but she is confident in her decision and tells him that she will schedule the hunt just after the local festival when the people will be in a good mood.

The hunt is announced, and the king of Jayanagar accepts the invite although he wants his son to lead it. The people of Sitapur are uneasy. They resent the tiger hunt—and that too by the neighbor, their traditional rival. Moreover, they reason that a marriage between Jayanagar and Sitapur will result in Jayanagar controlling Sitapur. A few angry people conspire to prevent the marriage by getting the prince out of the way.

On the eve of the hunt, the princess—who has just realized the reason behind the king’s consent of the marriage—“if we marry, your father’s influence will prevent all our plans for progress”—is visibly upset. Soon thereafter, an intruder unsuccessfully tries to kill the prince, and the princess is deeply shaken. She is tempted to call off the hunt, but the prince thinks that would be cowardice. The princess decides that while the hunt is on the next day, she will pray for her beloved’s safety at the Shiva temple. Excerpt 2:

The prince shoots a tiger the next day, but also, accidentally, shoots a man. So the injured man rides back on the prince’s elephant while the prince decides to walk. On the way back among the tall grasses, a king cobra bites the prince, who is then rushed to the snake charmer’s hut. The princess, who is just leaving the temple, is informed. The words of Jayanagar’s holy man haunt the princess: “Those who follow the torch of progress too swiftly sometimes get their fingers burnt.”

She rushes to the unconscious prince, and sits with his head on her lap, praying fervently. Now follows the famous lip lock scene in the film. To the background of the snake charmer’s music, we see the princess bending low and desperately kissing her lifeless lover, hoping to wake him up through her touch. “My prayers must be answered,” she pleads.

The snake charmer tells her about an “old cure” that must happen before sunset: “If Shiva wills it, another snake shall strike the prince again and draw out the poison.” He goes into the forest and brings back another cobra.

Meanwhile, the king hears the news of his dying son; distraught, he ascribes it all to karma, and blames himself for earning the ill will of the people of Sitapur. He decides to perform some good deeds: “prayers to the gods” and “alms to the people.”

We hear the snake music one last time, as the cobra glides by the prince and bites out the venom. The prince opens his eyes. “Praise be to Shiva,” “Har har Mahadev,” and “Jai Shiv Shankar” fill the air as an overjoyed princess hugs the prince tight. The end.

As the belief in karma stands vindicated—spectacle and pageantry aside—the West is left to its reflections on the subject.

A conclusory thought: Given the political context of the times, of the reality of a rising Indian discontent against the empire (it is worth remembering here that the three Round Table Conferences organized in London between 1930 and 1932 to discuss India’s demand for self-rule were a failure due to the highhandedness of the British), one almost wonders if the film’s depiction of the power of the people’s wrath against the ruler pricked the British conscience in any way. Did the British viewer feel a certain compunction, fear a backlash against the Raj, perhaps?

Image credit: www.bollyclips.com
Posted by Nivedita Ramakrishnan at 11:38 AM