This post first appeared in the PassionForCinema blog on September 1, 2010. 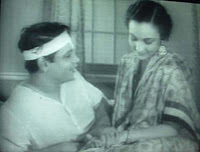 In Awara (1951), Raj Kapoor famously tells Nargis that it is not her fault that she initially mistakes him for a vagabond—actually, there is something about his face that makes him look like one: "Is mein tumhara kasoor nahin, meri soorat hi aisi hai." This memorable apology followed by Nargis warming up to Raj is quite the staple of the Raj-Nargis romance.

And that kicks off their tender and subdued onscreen romance in this production from Bombay Talkies Ltd. Watch Jairaj's apology to Renuka Devi and her jittery father (played by V. H. Desai) here:

Released on 17th December 1938, at the Roxy Talkies theatre in Bombay, Bhabhi, directed by Franz Osten, was a huge hit.

A quick synopsis: Based on "Bisher Dhuan" by writer Sardindu Banerjee (1899-1970), who adapted it for Bombay Talkies, Bhabhi is the story of an upright young man named Kishore (Jairaj) who promises his dying friend to take care of the latter's wife, Bimala (Maya Devi), left all alone in the world. Kishore brings Bimala to his house, where they live as brother and sister. Society disapproves, and so does Kishore's father, who disinherits his son. Meanwhile, Renu (Renuka Devi) and her father, Vinay Babu—a funny old man, a bundle of nerves—move in next door. Kishore and Renu fall in love, much to the annoyance of the pompous Anupam (Rama Shukul), who plans to marry the wealthy Renu. Anupam plays villain and creates much heartbreak for the lovers. On a side note, Renu's friend Bela (Meera), who is Anupam's cousin, falls for Kishore. Finally, all misunderstandings are cleared, thanks largely to Deenbandhu (the comforting and rather avuncular P. F. Pithawala), Kishore's former teacher.

About the film's leading pair: P. Jairaj (born Paidypathy Jairula Naidu) and Renuka Devi (born Khurshid Jahan, later Begum Khurshid Mirza), both hailed from illustrious families and joined films at a time when the profession had a dubious reputation. While Jairaj was born in Karimnagar in the Nizam's state of Hyderabad, and had India's reigning literary empress, Sarojini Naidu, for an aunt (a fact that he kept under wraps), Khurshid Mirza was born in one of Aligarh's most progressive families that founded the Aligarh Women's College.

Jairaj incurred the displeasure of his family when he ran away to Bombay in 1929, where he started off in silent films. Legend has it that they did not speak to him for nearly twenty-five years. For her part, Khurshid Mirza at least had the support of her immediate family—when she decided to try her luck in films starting in 1937, she was already a wife and a mother. Of course, her extended family and friends back in small town Aligarh were appalled. But the girl from Aligarh was way too determined to bother about other people's opinions, just as the lad from Hyderabad was set in his goal of making something of his life.

Apparently, Jairaj was all set to go to England to study engineering but it did not materialize, and he was rather dejected: fortuitously a relative put him in touch with a friend who worked for a film company in Bombay. Seizing the chance, Jairaj landed in Bombay, although he never thought of himself as hero material: the move simply meant self-reliance, some odd jobs here and there.

But, as luck would have it, he was soon offered a role in Sparkling Youth (Jagmagti Jawani) in 1929/1930. (His monthly salary as an actor was 75 rupees.) There was no turning back after that. Altogether, Jairaj acted in 11 silent films. 1931 saw the arrival of the talkie, and Jairaj with his strong command of Urdu (his Hyderabadi roots came in handy) had a distinct advantage. The drawback, though, was that he would have to sing his own songs, and Jairaj was really not much of a singer. He was grateful when playback singing arrived in 1935.

Certainly, Jairaj was spared the torture of having to sing for himself in Bhabhi—and—what's more—he did not have much lip-synching to do either; interestingly, Jairaj's character sings only in the very end, and that too very briefly. A largely songless hero in a Bombay Talkies production is, perhaps, unusual. Possibly the songs were interwoven with the storyline in such a way that only female vocals were required. Renuka Devi sang for herself, and so did Meera, the supporting actress.

About Renuka Devi, Baburao Patel of Filmindia magazine declared that "Bombay Talkies have found another Devika [Rani]" and that "her performance has that distinctive grace and poise which can only be associated with a lady of culture and education" (January 1939). This was an accurate assessment of the unconventional Begum Khurshid Mirza, who became Renuka Devi for the screen starting with her first film, Bombay Talkies' Jeevan Prabhat (1937), co-starring Devika Rani and Kishore Sahu. Bhabhi was Renuka Devi's second film. (She moved to Pakistan after partition and later became a successful television personality.)

If there is one song that Renuka Devi is famous for, it has to be the raag Malhar-based "Jhuki aayi re badariya saawan ki," in Bhabhi, picturized on her and Jairaj, with the latter dutifully accompanying the former, on the piano. Composed by Saraswati Devi, 1912-1980 (the earliest known, if not first, female music director in Hindi cinema), the song captures the beauty of the Indian monsoon and the accompanying exaltation of the human spirit. It is one of the best "saawan" songs in our films—simple and super hummable. Some sources attribute the lyrics to Meerabai though this is not verified. (Does anyone know?) J. S. Casshyap is the lyricist and dialogue writer for the film. "Jhuki aayi re badariya saawan ki":

My take on the film's theme: Why cannot a young widow live with an unmarried man, as his sister, in peace, without arousing ignoble thoughts in the minds of those around? Bhabhi touches upon the issue of society's narrow mindedness when it comes to man-woman relationships, although in an implicit way. The critique of an ignoble society is not the overarching concern here; in the end, it is more a case of the lovers triumphing rather than society being chastised—the latter is something that the viewer expects rightfully and discovers missing. As Kishore and Renu realize the depth of their love for each other, Bimala's case—and what it stands for—somehow seems to take a backseat.

That disappointment is, in great measure, offset by the melody of the "Haan qaidi" duet; as Jairaj and Renuka Devi s(w)ing their way to happiness, I wonder why the song is so painfully short. This truncation of beauty seems most unfair—so what do I do? I record the song over and over again on my audiocassette, and listen to it nonstop, and just pretend that it is one long song. "Haan qaidi":

P.S.: Does anyone know who is singing for Jairaj? In an interview with Bunny Reuben, Jairaj mentioned that he tried to sing for the screen only once—unsuccessfully. This was for a film called Patit Pawan (1933); despite a month's practice, a nervous Jairaj, wanting the song to be done and over with, reeled it all off in one go, totally breathless, without pausing for the orchestra. The song was scrapped, of course; and a mortified Jairaj vowed never to sing again.
Posted by Nivedita Ramakrishnan at 1:40 PM