The eternal and the transient: Jean Renoir’s The River (1951)

A shorter version of this post first appeared as "The River sutra" in The Hindu on November 6, 2011. 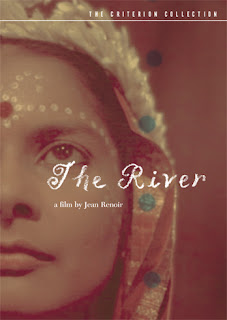 Watching Jean Renoir’s film The River (1951), made in Technicolor, is like watching a picture book come to life—a picture book of the young English girl Harriet’s girlhood days, spent in Bengal in the early years of the twentieth century. Growing up by the river that is punctuated with rice fields and jute fields, Harriet and her siblings lead a carefree life that is splendidly caught by Renoir’s camera in a way that is reminiscent of a series of Impressionist paintings. Indeed, the film could be described as one long painting that captures life’s fleeting moments and faithfully records the flow of life. As the flow of the mighty river mingles with the flow of life, the film places events—small and big—in perspective.

This was Renoir’s first color film, and the first Technicolor film to be shot in India, on location in Bengal. It had art direction by Bansi Chandragupta, who later became famous for his work with Satyajit Ray. Ramananda Sengupta, the cinematographer of Ritwik Ghatak’s first feature film, the classic Nagarik (1952), was the camera operator. During the making of the film, Renoir greatly valued the counsel of Satyajit Ray who was not yet known to the world.

Based on a somewhat autobiographical 1946 novel of the same name by Rumer Godden (who wrote many such works about life during the British Raj in India—see my posting on Black Narcissus, 1947), substantially rewritten for the screen, The River intertwines Harriet’s immediate life with the larger life around her—the latter largely shot by Renoir in the form of documentary footage on a riparian lifestyle.

Harriet and her siblings and their rather proud friend Valerie playing in the lush green garden watched by their Indian nanny; Harriet’s naughty little brother Bogey transfixed by the cobra in the pipal tree, which will sadly be his undoing; Harriet’s father going to and from the jute factory where he works; the pensive Mr. John next door, with his half-Indian half-English daughter, Melanie (played by a young Radha Sri Ram before she became Radha Burnier, the famous theosophist), and their new guest—the young American, Captain John; a rather Christmassy Diwali party hosted at Harriet’s place that is exciting to all the children because Captain John, the dashing war hero with one leg, is attending—the subjectivity of this world is interspersed with the life around that is shaped by the flowing of the river on whose banks people eke out a living.

Days come and go, the seasons change, the festivals follow one another—and life goes by as the perennial river does, in one broad, majestic sweep, a relentless force that can neither be paused nor reversed.

As the earthen idol of Kali becomes earth once again, at the end of the festival, only to come alive the following year, so does the cycle of birth and death—of creation and destruction—form the basis of all life, which plays out without beginning or end. Harriet and Valerie painfully realize that they cannot always remain cocooned in the carefree world of their childhood, and as Valerie comments insightfully, “I didn’t want it to change, and it’s changed.”

This stoicism seems to come much more naturally to the half-Indian Melanie than to the westerners, all of who, unlike Melanie, have to work hard at accepting the inevitable. Considering that the character of Melanie was not in the book, and was an invention for the screen, one wonders if Renoir, as part of the West’s Orientalist discourse—that Orientals are natural mystics—inevitably equated her Indianness with an innate Eastern wisdom.

When Melanie’s father worries about the future of his half-caste daughter and tells her that perhaps she “should never have been born,” Melanie, with philosophical confidence, retorts: “But I am born. Someday I shall find where I belong.” In the same vein, she makes Captain John—a man whose disability frustrates him so much that he is always running away from himself—face the truth. When, in denial mode, he distraughtly says, “I am a normal man in any country,” Melanie replies ruthlessly but realistically, “Where will you find a country of one-legged men?” Melanie, in Renoir’s world, represents the unfathomable wisdom of the Orient.

I have never heard Carnatic music in the context of Bengal, but I must say Renoir’s choice of music is hardly incongruous. Melanie’s Bharatanatyam recital to the song Karunai irukka vendumae in melodious Kambhodhi raagam, and Bogey’s funeral procession to the accompaniment of a song in majestic Kaanada raagam only reiterate the macro-view of life that Renoir paints in all its sublime colors. The music elevates; and, to put it metaphorically, the soul glides off the boughs of the film’s magnificent pipal tree.

As the narrative reaches its end, the black blotch of Bogey’s untimely death gives way to riotous springtime. It is Holi, and as the postman (who brings Captain John’s letters from faraway America to the eager Valerie, Harriet, and Melanie) is bombarded with the colors of life, there is life and hope yet again in the form of a newborn, Harriet’s latest sibling, an entity now firmly present in the world, but who did not exist awhile back—while the river continues to flow as it has done, uninterrupted, for centuries.

Posted by Nivedita Ramakrishnan at 12:07 AM